Which material is best for wiping up Y2’s spills in the dinner hall?

After a restful week off for Half Term, Year 2 are back eating in dinner in the hall again (hurray!).

However, Miss Shackford had a problem as she didn’t know which material would be the most ABSORBENT for wiping up Year 2’s spillages from the tables.

Miss Shackford tasked Year 2 with designing and conducting an experiment to test which material was the most absorbent. We first of all each made a prediction; a lot of children thought the card would be the most absorbent as it was the thickest material.

As Miss Shackford was so impressed, she let Year 2 use special scientific equipment which came all the way from Year 6; stopwatches and pipettes. The latter of which we quickly realised the danger of if they were used the wrong way round! 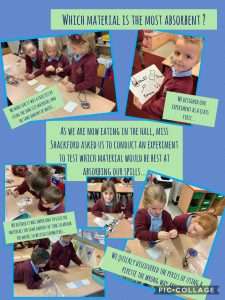