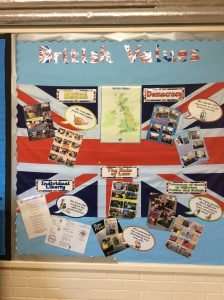 The Department for Education states that there is a need:

“To create and enforce a clear and rigorous expectation on all schools to promote the fundamental British values of democracy, the rule of law, individual liberty and mutual respect and tolerance of those with different faiths and beliefs”.

The Department for Education defines British Values as follows:

Our school reflects British values in all that we do.  We encourage our children to be creative, unique, open-minded and independent individuals, respectful of themselves and of others in our school, our local community and the wider world.

At St Columba’s Roman Catholic Primary School we uphold and teach pupils about the British Values which are defined as:

These values are taught explicitly through Religious Education (RE), Personal, Social, Health and Emotional (PSHE), Spiritual, Moral, Social & Cultural Education (SMSC).  We also teach the British Values through planning and delivering a broad and balanced curriculum.

At St Columba’s Roman Catholic Primary School, these values are reinforced regularly and in the following ways:

Democracy is an important value at our school. Pupils have the opportunity to have their voices heard through our School Council. The elections of members of the School Council are based on pupil votes.

The importance of laws and rules, whether they are those that govern the class, the school or the country, are consistently reinforced throughout regular school days. Pupils are taught the value and reasons behind laws, that they govern and protect us, the responsibilities that this involves and the consequences when laws are broken. Visits from authorities such as the police, fire service, lifeguards etc. are regular parts of our calendar and help reinforce this message.

Pupils are actively encouraged to make choices at our school, knowing that they are in a safe and supportive environment. As a school we provide boundaries for our children to make choices safely, through the provision of a safe environment and planned curriculum. Pupils are encouraged to know, understand and exercise their rights and personal freedoms and are advised how to exercise these safely, for example through our e-Safety teaching and PSHE lessons. Pupils are given the freedom to make choices, e.g. signing up for extra-curricular clubs, choose the level of challenge in some lessons and are becoming increasingly more involved in child–led learning, e.g. through planning and delivering child led liturgies.

Our school ethos and behaviour policy are based around core Christian values such as ‘respect’ and ‘responsibility’ and these values determine how we live as a community at St Columba’s Roman Catholic Primary School. Children and adults alike, including visitors, are challenged if they are disrespectful in any way. Values are highly visible around the school and can be seen in posters, certificates and as part of our agreed codes.

Tolerance of Those of Different Faiths and Beliefs:

This is achieved through enhancing pupils’ understanding of their place in a culturally diverse society and by giving them opportunities to experience such diversity in our local community which is by large white British. Collective Worships and discussions involving prejudices and prejudice-based bullying have been followed and supported by learning in RE and PSHE. We celebrate ‘European Day of Languages’ as a whole school encouraging children to research and discover differences and similarities between us and our European neighbours. Likewise we use opportunities such as the Olympics and World Cup to study and learn about life and culture in countries such as Brazil .

Click on the image below to see how British Values underpins everything that we do at St Columba’s Roman Catholic Primary School. 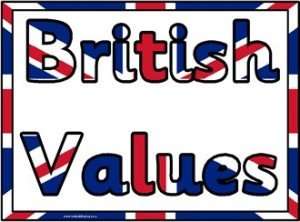 We have worked hard to ensure that we address British Values at every stage of your children’s school life. To view what aspects are covered in each Year Group click on the appropriate link below.

Any cookies that may not be particularly necessary for the website to function and is used specifically to collect user personal data via analytics, ads, other embedded contents are termed as non-necessary cookies. It is mandatory to procure user consent prior to running these cookies on your website.